On the 6th December 2017 BMC held a stakeholder workshop for farmers at Lobatse. The workshop’s objective was to demonstrate the 2018 capacity needs/budget of the Commission, sales and operation plan, market requirements, beef valuechain, concerns/inadequacies as well as strategies to enable a better production year.

Speaking at the Workshop Chief Executive Ocer, Dr Akolang Tombale said the commission’s plant is underutilized since they slaughter fewer cattle than its capacity allows. He urged the farmers to come up with eective strategies to eradicate beef
measles as it threatened the beef industry.

Dr Tombale said the other worrying factor was that currently BMC-Lobatse was slaughtering only 300 heads of cattle daily even though it had the capacity to triple the number. He said the highest records were only achieved in 2010, but somehow did not translate into positive revenue followed by sharp decline of throughput in 2011 by 36 per cent. He explained that in a 10-year period, Lobatse had slaughtered an average of 105 000 cattle.

He said dismal performance of Francistown abattoir continued averaging 1 288 cattle per month, which was far less than a weeks’ kill of 1 900 cattle. Dr Tombale informed farmers that Maun plant was closed for production since end of September due to Foot and Mouth Disease (FMD) outbreak.

He stated that Lobatse BMC was the only functioning wheel with an average slaughter of 7 606 cattle per month. He said the highest slaughter month was August with 12 655 cattle. He said BMC bought weaners from farmers through DCP programme (Live Weight) and put them in feedlots to make them compliant for EU slaughter. Dr Tombale said BMC was also forced to buy cattle not suitable for feeding such as those with lower live weights, which disadvantaged the BMC.

Dr Tombale highlighted that a total of greater than 105,250 cattle is budgeted for EU exports in 2018, which is 12.7 %( 15,000 cattle) lower on 2017 budget. Dr Tombale informed farmed about the 2018 plans. He said that farmers should increase their cattle compliance in order to enable increased direct slaughter by at least supplying 23 000 cattle in the rst quarter of 2018.

He indicated that all relevant stakeholders were working round the clock to ensure that the abattoir regained its status of supplying the EU market.

In their remarks most of the farmers decried late payment and low prices. Farmers wanted the Francistown abattoir to be closed as it is unproductive. They noted that most roads leading to their farms were in bad conditions.

Mr Neo Moroka from Kgalagadi South noted that last year they experienced challenges such as shortage of water, which aected production and poor pastures. One of the farmers Mr Boyce Sebonego Jr advised farmers to work together to improve conditions of the roads and also encouraged them to motivate their counterparts to form and join farmers associations.

In response, Dr Tombale said they would address concerns raised by farmers such as late payments and advised them to treat farming as a business venture. 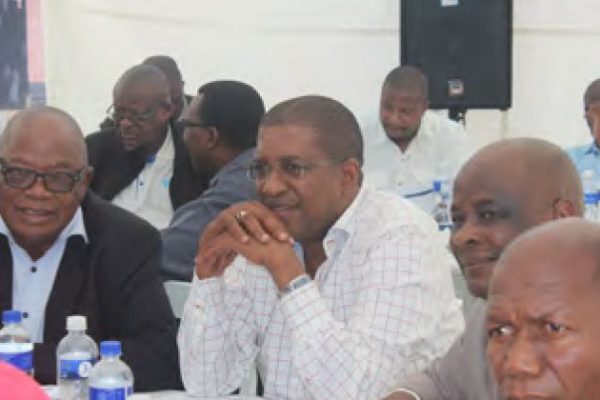